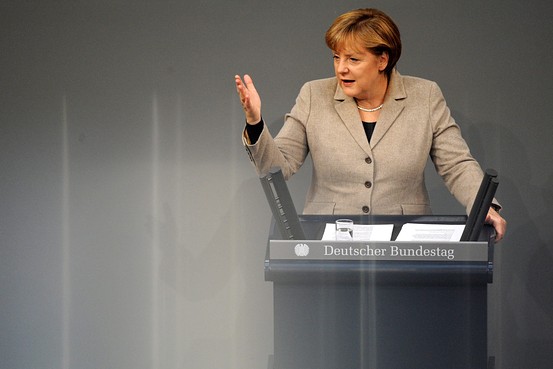 German Chancellor Angela Merkel makes a government statement on the floor of the German Bundestag in Berlin on Wednesday.
BERLIN—More gloom descended on Europe as the euro sank below $1.30 for the first time since January and leaders underlined how far apart they remain on a way out of the region's deepening debt crisis.
German Chancellor Angela Merkel, whose positions have shaped the response to the crisis since its inception, restated her position that common euro-zone bonds were no solution to the crisis—and said she opposed lifting the cap on the euro-zone bailout funds beyond €500 billion ($651 billion).
Euro bonds "aren't suitable as a rescue measure," she told the German parliament.


Italy managed to sell its bonds off at auction but at record yields. Greece's economy is worse than expected and a deal with the IMF is becoming harder to achieve. Costas Paris and Matina Stevis discuss the politics of the crisis.

Italy's new prime minister, Mario Monti, meanwhile, said Germany had believed last week's European-Union summit, which dragged on until the early hours of Friday would be enough to calm financial markets.
He said that further agreements would be necessary to resolve the crisis, including a plan for common bond issues among euro members, which would be on the agenda for the EU summit in March.
"The Italian government insisted heavily on euro-bonds, which are not a back-door way to allow fiscal laxity but will boost growth," Mr. Monti told the Italian Senate.
He added that jointly guaranteed debt would deepen Europe's capital markets.
Ms. Merkel said the path to fiscal union was irrevocable, but that it could take years to overcome the crisis.
With many in Europe still hoping against hope that the European Central Bank will step in more aggressively to buy bonds and bring down borrowing costs for struggling governments, Jens Weidmann, the president of Germany's Bundesbank and member of the ECB governing council, indicated his opposition to that hadn't softened.
The idea that the ECB should turn on the printing presses to help finance some debt-ridden euro-zone states should be put to rest for good, Mr. Weidmann said. Central bank "independence is lost when monetary policy is tied to the wagon of fiscal policy and then loses control over prices," he said.
Borrowing costs for cash-strapped governments continued to rise, with Italy auctioning five-year bonds for a euro-era high of 6.47%. In an illustration of the gap among euro-zone countries, Germany borrowed two-year money for 0.29%.
The new "fiscal compact" agreed at the summit last week should be completed in the first six months of next year, European Commission President José Manuel Barroso said Wednesday.
"We are going to hopefully conclude negotiations for a new fiscal compact during the Danish presidency," Mr. Barroso told the European Parliament. "The crisis is not yet behind us; there's a lot of work ahead," he added.
Denmark takes over the European Union's six-month rotating presidency from Poland on Jan. 1.
Ms. Merkel said that all member states, including Germany, will need to start paying a cash deposit for the new euro-zone bailout fund—the European Stability Mechanism—in 2012. As part of the €500 billion cap, euro-zone countries are required to put down a total of €80 billion in cash, with Germany providing about €22 billion of that, which it plans to do in yearly installments of €4.3 billion.
At the summit, leaders also decided that private-sector creditors would no longer be required to participate in losses linked to debt restructuring.
Mr. Monti said this so-called private-sector participation, which had been agreed by Ms. Merkel and French President Nicolas Sarkozy at a meeting in Deauville earlier this year, was a "mistake."
"Merkel and Sarkozy made a mistake, and now they know they should hold precautionary discussions with others first," Mr. Monti said.
British regulators are meeting with banks to discuss the state of their preparedness for a potential breakup of the euro zone, according to people familiar with the matter.
The U.K.'s Financial Services Authority has been talking with chief risk officers at top British and international banks to get a better understanding of their contingency planning, the people said. The regulator has asked banks to submit reports detailing their preparations for what would happen if the monetary union unraveled or individual member countries were to revert back to their old national currencies.
The FSA is planning to host a roundtable meeting in coming weeks at which top bank executives will huddle with senior regulators to compare notes on how they can further prepare, these people said. The meeting will include executives from big British banks as well as international companies with London investment-banking arms.
"It's an opportunity for firms to share their experiences," one person said. The meeting will include a discussion about areas in which the banks need to improve their preparations, this person said.

The FSA also is engaging in one-on-one dialogues with some banks to discuss ways they can do more to prepare for a possible euro-zone breakup.
A top FSA official, Andrew Bailey, said late last month that the FSA is encouraging banks to engage in contingency planning. "Good risk management means planning for unlikely but severe scenarios, and this means that we must not ignore the prospect of the disorderly departure of some countries from the euro zone," Mr. Bailey said at a London conference. "I offer no view on whether it will happen, but it must be within the realm of contingency planning."
The euro sank below $1.30 for the first time in 11 months. By midday, New York time it had rallied back to $1.30 from a low of about $1.2950, but it was still almost 0.3% down on the day.
European stock markets also fell. Paris was down 3.33% on the day, Frankfurt down 1.72% and London down 2.25%.
—Frances Robinson,
Margit Feher and David Enrich contributed to this article.
Αναρτήθηκε από Μια Ζωη Αγωνες στις 2:07 μ.μ.

this is unbelievable. i can't believe the eu and even the ecb. i'm surprised draghi isn't put under fire for how he said a new fiscal compact is needed and how the ecb would provide measures to solve the debt crisis. he said it needed to be sequential though, hinting that they better come up with something in the summit last week in order for the ECB to do something. then the day the summit begins, he pulls a firecracker out of nowhere and says "i'm so surprised on how people misinterpreted my comments last week." the longer the ECB takes, the more costly it's going to be. in my mind, they sort of tricked countries in the EU to give up their sovereignty for nothing. they haven't done anything since the summit last week!!!!! and now look what's happening. people are starting to really consider breaking up the eu. good going draghi. the last time an ex goldman sach executive decided to let markets work on their own and not intervene was when hank paulson let lehman brothers collapse. the systemic risk of that collapse was catastrophic and the US understood that after it happened. that's why they haven't been hesitant to bail out banks that have such huge systemic risks in the global economy. the eu sovereign debt crisis is much more serious than the lehman problem, and germany/ecb can't suck up their pride and realize what they need to do to save the eu and GLOBAL economy. germany, bundesbank, merkel, and draghi are acting imprudently for what? to ensure the ECB preserves its independence???? this in unbelievable. we need the yen and we need the euro to stand up against the dollar..... i bet china's hoping the eu breaks up so they can choose which countries they want to penetrate and own for the future. i don't blame china for not wanting to solve this european sovereign debt crisis if the EUROPEAN central bank isn't even willing to do it. they're better off waiting for the EU to do something stupid so they can come in and own everything.