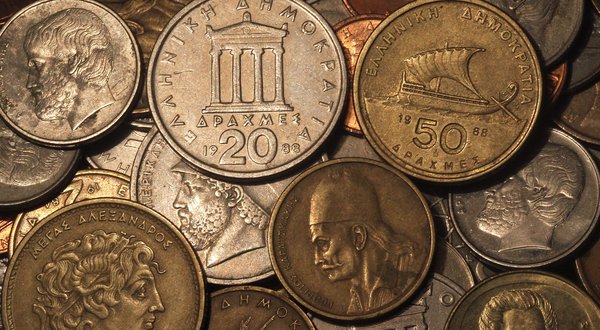 Drachma coins that were replaced by the euro in 2002; the currency's return is much debated.

LONDON — It would be Europe’s worst nightmare: after weeks of rumors, the Greek prime minister announces late on a Saturday night that the country will abandon the euro currency and return to the drachma.
Instead of business as usual on Monday morning, lines of angry Greeks form at the shuttered doors of the country’s banks, trying to get at their frozen deposits. The drachma’s value plummets more than 60 percent against the euro, and prices soar at the few shops willing to open.
Soon, the country’s international credit lines are cut after Greece, as part of the prime minister’s move, defaults on its debt.
As the country descends into chaos, the military seizes control of the government.
This scary chain of events might never come to pass. But the danger that Greece or some other deeply damaged country in the euro zone could leave the single-currency union can no longer be ruled out. And it was largely this prospect that drove leaders last week to agree to adopt strict fiscal rules that they hope will wrap the 17 European Union nations that use the euro into an even tighter embrace.
Officially, the guardians of monetary union have refused to discuss in public the possibility of member states abandoning the euro — a contingency not even addressed in any of the treaties governing the monetary union. As Mario Draghi, the president of the European Central Bank, put it last week: “It would be imprudent to create contingency plans when we see no likelihood that they could happen.”
But as the truth dawns in Greece and other weak euro zone economies that the price for remaining bound to the single currency will be more hardship and sacrifice, a growing number of legal and financial experts — to say nothing of the Greeks themselves — are examining in detail what would happen if Greece abandoned the euro.
“We should be under no false pretenses that we are not currently on the drachma train,” said Jason Manolopoulos, a Greek hedge fund executive and author of “Greece’s ‘Odious’ Debt.” “That does not mean we will end up there, but that is our present course.”
Over the last year, Greeks have withdrawn almost 40 billion euros, or nearly $53 billion, in deposits from their banking system, equal to about 17 percent of the nation’s gross domestic product.
A total of 14 billion euros in deposits was withdrawn in September and October alone. According to testimony by Georgios A. Provopoulos, the head of the Greek central bank, before a parliamentary committee last month, this outflow continued in early November “at a very large scale.”
The deposit flight peaked in October and early November, at a time of intense political uncertainty in Greece and financial turmoil in Europe. According to Mr. Provopoulos, the outflows have stabilized of late under the leadership of the new prime minister, Lucas D. Papademos.
A dedicated europhile, Mr. Papademos was the head of Greece’s central bank in 2001 when the country adopted the common currency. Since becoming prime minister in November he has said forcefully that Greece’s future lies within the euro zone, not outside it.

But that has not stopped investment banks, academics and lawyers from digging deep into what a euro exit would look like. Over the last month Nomura and UBS have come out with detailed studies on the topic. Nomura forecast a 60 percent devaluation of the new drachma. UBS went further, warning of hyperinflation, military coups and possible civil war that could afflict a departing country.
One of the more detailed studies comes from Eric Dor, an economist at the Iéseg School of Management in Lille, France.
In “Leaving the Eurozone: A User’s Guide,” Mr. Dor starts with the obvious: any return to the drachma would have to be preceded by an immediate freeze on bank deposits.
To prevent panicked Greeks from sending the rest of their deposits abroad, transfers to countries outside of Greece would be halted. As the new currency inevitably lost value, new drachma accounts would remain frozen.
Shops would be required to accept scrip or devalued euros circulating only within Greece until the country’s bank note printer, operated by the central bank, could churn out enough drachmas to replace the 200 billion euros in cash and deposits currently in Greece. Meanwhile, Greece would become a financial pariah.
Visitors would find Greece a paradise of bargains, but for most Greeks themselves, travel would become prohibitively expensive.
“I hope it does not happen,” Mr. Dor said. “But one has to be prepared.”
One person who does think a Greek exit will happen is Charles Proctor, a British lawyer who has studied the legal intricacies of leaving the euro zone. “I think there has to be a recognition that a single currency does not suit a vast range of economies,” Mr. Proctor said. “And that some member economies must depart in order to get their economic houses in order.”
ike others, he points to the fact that there is no explicit clause in European treaties that allows for an easy departure, either forced or voluntary. While 10 European Union countries do not use the euro, a disorderly exit would almost certainly mean that Greece would have to leave the union as well.
Mr. Proctor also takes on the thorny issue of what would happen to the investor holding a Greek bond that is governed by domestic law, as more than 90 percent of Greek bonds are.
Most likely, he concludes, the result would be default as investors would not accept interest and principal payments in devalued drachmas.
While this would certainly hurt European banks, the European Central Bank, which owns around 60 billion euros or so of Greek bonds, would suffer the most.
Unless the International Monetary Fund agreed to help, Greece would be unable to borrow from abroad. On the plus side, with a cheap currency and restored control of its monetary policy, Greece’s chances of returning to growth might improve drastically.
While their numbers remain small, some Greek economists say that this is the only way to address the country’s persistent inability to balance its trade. Theodore Mariolis, an economist at Panteion University in Athens, argues that a devaluation of 50 percent or more could close Greece’s trade gap without sending inflation soaring — an outcome that many economists might regard as too good to be true.
But whether that provides a long-run solution for a country that has failed to improve its competitiveness is questionable. And the biggest problem for Greece if it returns to the drachma, says Hal S. Scott, an expert on international finance at Harvard Law School, would be persuading Greeks to believe in and hold an ever weakening drachma when a much stronger euro would be so readily available.
This constant selling pressure would make a devaluation all the more extreme, raising the threat of hyperinflation. “The devaluation issue is the most serious part,” Mr. Scott said. “I just do not see how you deal with it.”
Αναρτήθηκε από Μια Ζωη Αγωνες στις 12:57 π.μ.