Billions of U.S. Tax Dollars Spent and Nothing to Show for it in Iraq!!!!

Just as Washington contemplates additional
tax hikes and austerity cuts for the Ameri-
can people, a shocking report surfaces that
sheds new light on the kind of wasteful over-
seas government spending that contributes to the
impending debt crisis.
According to a recent retrospective from Stuart
Bowen, the U.S. special inspector
general for Iraq reconstruction
(SIGIR), a significant portion of the
American taxpayer dollars spent
on rebuilding projects in Iraq have
largely been squandered or unac-
counted for while doing very little
to improve the lives of Iraqis.
The report, entitled “Learning
from Iraq,” comes just two weeks
before the 10th anniversary of the U.S. led invasion
and has some lawmakers on Capitol Hill calling for
a “top-to-bottom” review of the State Department
and its foreign assistance agency U.S. AID.
“The extent of waste and abuse in the $60 billion
of Iraq reconstruction funds coupled with the in-
stability still evident in Iraq is appalling and high-
lights real failures of planning and execution that
must be corrected to make U.S. foreign assistance
a more effective tool for advancing the national in-
terests of our country,” said Sen. Bob Corker (R-
Tenn.) of the Senate Foreign Relations Committee.
Iraq’s acting Interior Minister Adnan al-Asadi is
quoted in the report as saying that “major mistakes”
contributed to the failures of U.S. reconstruction
efforts, including overpaying contractors on proj-
ects that ended up costing double or triple their ac-
tual worth, absence of meaningful cooperation and
coordination between U.S. authorities and the gov-
ernment of Iraq, and tolerance of rampant corrup-
tion that occurred on both the Iraqi and U.S. sides.
“With all the money the U.S. has
spent, you can go into any city in
Iraq and you cannot find one build-
ing or project [built by the U.S. gov-
ernment],” al-Asadi said. “You can
fly in a helicopter around Baghdad
or other cities, but you cannot
point a finger at a single project
that was built and completed by
the United States.” 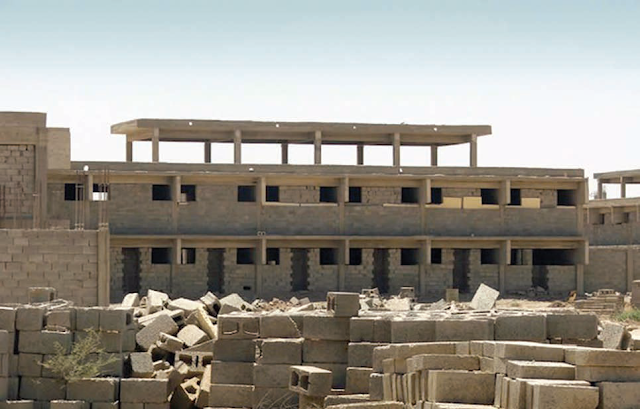 Among those unfinished projects is a half-built
prison in Diyala that cost U.S. taxpayers $40 mil-
lion before being deemed unsafe and ultimately
abandoned. Another is the Basrah Children’s Hos-
pital, which the SIGIR notes is currently “200 per-
cent over budget and four years behind schedule.”
According to a SIGIR interview with Iraqi Prime
Minister Nouri al-Maliki, U.S. reliance on “ill-in-
formed” and “dishonest” subcontractors signifi-
cantly contributed to the misspending of U.S. funds.
In the report, al-Maliki recollects that the United
States built over 100 healthcare centers “at a cost
far more than budgeted, while delivering much less
than promised.” SIGIR audits confirm this, noting
that primary healthcare programs have thus far cost
$345 million and are now 40 percent over budget. In
yet another example of overspending, the prime
minister recalls a minor school refurbishment proj-
ect “for which the school’s administrator requested
$10,000, but the U.S. authorities insisted on provid-
ing $70,000—a needless waste.”
Other expensive projects that have underper-
formed include a water treatment plant in Fallujah.
Though the estimated $35 million facility was ex-
pected to be up and running within 18 months, the
construction actually took seven years and cost a
total of $108 million. By the time it was completed
in 2011, the facility ended up assisting only 38 per-
cent of the Iraqi population it was designed to serve.
In terms of corruption, the SIGIR report gives
several examples, including a crime ring run by a
former U.S. Army officer who paid out tens of mil-
lion of dollars in kickbacks for bottled-water con-
tracts while working at the Iraqi reconstruction
headquarters in Kuwait.
Although the recent disclosures on wasteful gov-
ernment spending in Iraq are appalling enough,
they still dwarf the horrific human costs of a need-
less war that has claimed the lives of roughly 5,000
Americans and 1.5 million Iraqis and left an entire
nation in ruins.
Kadom al-Jabouri, an Iraqi who made interna-
tional headlines after being photographed taking a
sledgehammer to a statue of Saddam Hussein, re-
cently told
The Guardian
that he now regrets tak-
ing part in the demolition in light of what has
occurred over the past 10 years.
“Under Saddam there was security,” said al-
Jabouri. “There was corruption, but nothing like
this. Our lives were protected. And many of the ba-
sics like electricity and gas were more affordable.”
He went on to say, “The Americans began it. And
then with the politicians they destroyed the coun-
try. Things seem to get worse all the time.”
——
Keith Johnson
is an independent journalist and the editor of “Revolt of the
Plebs,” an alternative news website at http://revoltoftheplebs.wordpress.com/
Αναρτήθηκε από Μια Ζωη Αγωνες στις 6:33 π.μ.